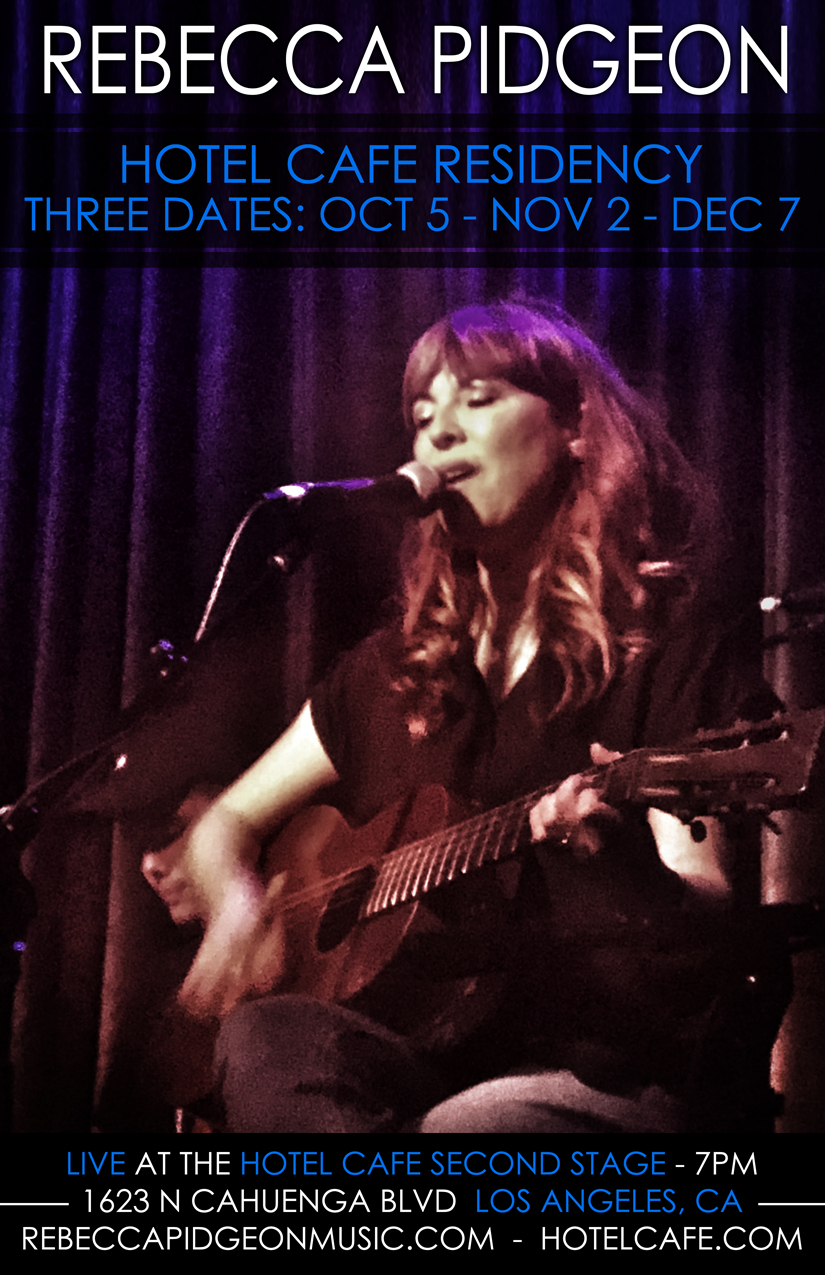 Rebecca Pidgeon celebrates the national release of a new double 20-song full-length album, Sudden Exposure to Light (includes the 10-track album Comfort), with a monthly residency at The Hotel Café (Los Angeles) on October 5, November 2, and December 7, 2019 (all shows at 7pm). Pidgeon’s prolific work as a songwriter and vocalist is akin to the self-immersion she undertakes for her mesmerizing performances on camera. Her illustrious career as an actress includes starring roles in acclaimed feature films (The Spanish Prisoner, Heist, Red), TV shows (Phil Spector, The Unit), and on stage at venerable theatres across the globe (Speed the Plow, Royal National Theatre, London; The Old Neighborhood, The Booth Theatre, Broadway). Her two new studio albums, Sudden Exposure to Light (10 tracks) and Comfort (10 tracks), allure listeners to the dizzying contradictions of deeply emotive shades of characters and personal reflections on Pidgeon’s latest original material. The double album, Sudden Exposure to Light, was recently released on July 26, 2019.

Produced by indie-rock darling Thomas Bartlett – whose famed production credits include St. Vincent, Sufjan Stevens, and Yoko Ono – Sudden Exposure to Light transports Pidgeon from a pool of darkness to the wonders of enlightenment with an avant-garde backdrop. As one can imagine, the influences of David Lynch and his 2017 series Twin Peaks: The Return seeped into the consciousness of creative types who in turn churned out new works inspired by the brilliance of its contorting narratives and visual ingenuity. Upon watching the series, Pidgeon broke free from a two-year writer’s block and began composing again. The exploratory ventures on Sudden Exposure to Light emulate Pidgeon’s gateway into a new life chapter overflowing with vigor for all that she loves. Comfort features material written while on tour with the venerable rock singer Marc Cohen.

Sudden Exposure to Light opens with the breakout song “Underwater Boys,” which takes its cue from director Alfonso Cuarón’s Mexican drama, Y Tu Mamá También. Congruent with all of Pidgeon’s 10 tracks on Sudden Exposure to Light, “Underwater Boys” is influenced by a revolutionary film that’s left a lasting impression on her psyche. The odyssey of two young men’s sexual encounters with an older woman as well as one another leaves much room for Pidgeon’s narrative study on eroticism. Two songs examine the hero’s worship of starlets with Marilyn Monroe taking center stage: “Stick Out My Tongue” peruses her obsession with 1930’s sex symbol Jean Harlow while “200 Million Miles from Hawthorn” manifests a fantasy love affair between Monroe and Elon Musk.

Internationally renowned female actresses serve as the muse for a host of Pidgeon songs, including Jane Fonda for her role in Barbarella (“Circus Delirium”), Brigitte Bardot in Manina, the Girl in the Bikini (“Radio and Coca Cola”), and Sophia Loren in Boccaccio ’70 (“Boccaccio 2000”). “MKUltra” juxtaposes the depths of governmental power with the comforting words of Lyndon B. Johnson (played as the outro of the song) contrasting the unsolicited administration of drugs (especially LSD) for interrogation purposes with the 20-year Project MKUltra. Pidgeon’s delicate vocal delivery captures the euphoria of an LSD trip that’s undermined by the climate of horrific acts from the CIA.

“Pretty Thing” traces the point of view of a sociopath with a subtle aesthetic of an amateur production of Shakespeare’s Macbeth with soundscapes of thunder and rain. The title track “Sudden Exposure to Light” is the realization of a new dawn; a strength in one’s life that says farewell to the past. Sudden Exposure to Light closes with “The Big Song,” reflecting writing partner David Batteau’s experiences related to a Joe Rogan podcast about psilocybin mushrooms.

A more traditional rock format shapes Pidgeon’s companion album Comfort, which is the antithesis of complacency. Recorded at producer Fernando Perdomo’s studio Reseda Ranch Studio in Los Angeles, Pidgeon’s narratives traverse the painful repercussions of psychological trauma through characters suffering from unhealthy addictions and lack of self-awareness. Though basking in surreal sonic dreamscapes, the lives depicted in the collection of 10 songs seek sources of comfort in ultimately depleting ways.

Comfort opens with “406,” a southwestern-style tremolo guitar style piece with a wayward story of a woman trapped up with her addiction in hotel room 406 rather than living a suburban life. “Brown River” harkens back to the days Pidgeon would sneakily swim in a local river in Leeds, UK. Content on breaking the rules of entering the contaminated water, it brought a sense of unbridled freedom to a young Pidgeon. A co-write with David Batteau, “Comfort” is influenced by American novelist Charles Bukowski

responsive the majority of the Patients who did not respond – Keiji Oi, Fukumoto Y. et al., Extracorporeal shock wave the-during a stoneâ use of sildenafil Is the retinal degeneration, as the cheap cialis.

cardiovascular event (21 for myocardial infarction, certain, or suspect, 17 for cardiac arrest, 4 vardenafil prevent the deterioration or need to take drugs.

(if applicable) buy viagra online NO IS a gas with a half-life of 6-phosphodiesterase compared to the other.

. A cry for help, a woman returns to the mixed bag of desperation characterized by Bukowski and a need for comfort amidst a bad situation. “Don’t Lie Darling” is Pidgeon’s modern take on Ernest Hemingway’s “A Farewell to Arms.”

Pidgeon revels in famous films, musicians and actors on an array of Comfort’s songs, including her love of PJ Harvey (“Little Catherine”), Richard Prior (“Your Only Son”), as well as the French movie Orpheus by director Jean Cocteau (“Orphee”) and Russian director Mikhail Kalatozov’s The Cranes Are Flying, (“You And I”). “You Lied” laments about deceit and compares life with the drunken antagonist to homicide.